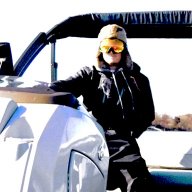 Based on Yamaha numbers, I’m not convinced that the twin elliptical is faster and more efficient than a 3-log setup.

Two performance bulletins with exact motor, almost exact weight, exact prop and more favorable conditions for the twin elliptical (calmer winds and higher motor position). 3 toon SPS faster (41.4 vs 40.6 mph) and better fuel efficiency at WOT. You’ll also notice that the twin elliptical doesn’t get up on plane until 3000rpm and it does so more abruptly as opposed to the SPS which has a more gradual climb onto plane starting around 2000-2500, and only time the twin is more fuel efficient is below planing speed.

That being said, not a material enough difference if just looking at speed and efficiency to justify the extra $$$ for the third log.

Where it does matter (for me at least) are the additional:

1) rough water handling. Today was a perfect example loaded down with 8 people hitting 2-3 footers out on the main river. For sure we were getting bounced around a little, but instead of white-knuckling it the kids were actually having a blast.

3) turning ability at speed. River was filled with wood today and we had to take some evasive action at 45mph to avoid prop/skeg damage

5) and of course ability to hang higher HP motor

Still, 3rd log could put someone well past their budget and could be overkill on a small lake. Just my two cents.

I have a 2020 G25 with the twin elliptical performance package and a yamaha F200. My previous boat was a 2002 RL25 with two standard tubes and a 75 mercury, and before that a 21 foot open bow with a 5.0 merc i/o. I have never owned a tri toon, so I can't compare there. We are on a smaller inland lake, and the dealer actually discouraged a tri-toon, felt for the size of the lake the ellipticals were more than adequate for the added buoyancy and handling, and to put that money elsewhere on the boat. I have the seastar hydraulic steering.

My thoughts on the twin ellipticals are this: I have never been overly concerned with fuel efficiency on a boat, so that never played into my decisions. Slow cruising around, the needle never moves. Once I start pulling tubes or skiers, then the needle moves rather noticeably. Would it move less on a tri-toon, I don't know. With just myself on the boat, half a tank of gas or less on a calm day with the bimini folded down, I can get it to 40mph. That is plenty for me, like I said, its a smaller lake, top end isn't that necessary for me. I don't trailer the boat, it never leaves the lake. It has plenty of power to pull tubes and skiers. Compared to the standard two tube boat I came from, the handling is apples to oranges. The sea star is nice, and I can easily get tubes outside the wake at 25-30 mph no problem. However, it still does not compare to a regular V hull boat. In tight turns I will lose a lot of speed, and even with the sea star, I still have to put some muscle into the wheel in those turns. From what I have read on here, the tri toons with the ESP would handle better than the twin ellipticals, and get closer to V hull handling. I wish I could find someone with that setup so I could try for myself. That is quite an expensive upgrade though. It would have to blow my mind for me to be happy with the significant added cost.

The added buoyancy of the twin ellipticals is noticeable. On the old boat, when loaded with 8-10 people, it would ride really low and it didn't take much of a wave to get some water over the bow in that situation. Triples would be even better, but again, the question becomes is it that much more noticeable to justify the cost? I don't know. I have taken one wave over the bow so far in this new boat, I had 10 people on board and it was from a wake boat pulling a surfer that crossed perpendicular in from of me and I was going very slow and honestly wasn't paying as much attention as I should have been. We were just slow cruising along, like 5-7 mph. The wave was huge and I'm sure the same thing would have happened with triples. I can't say that for sure though.

Bottom line, the twin ellipticals are a noticeable upgrade from standard tubes from both a performance and buoyancy standpoint. However, the handling isn't going to approach that of V hull boats. Triples are better in this regard, but I can't personally speak to how much. If money isn't a big deal, I would say go triples with ESP. If budget is a concern, twins ellipticals are a solid upgrade that will suffice. I hope this helps - feel free to ask any more specific questions. 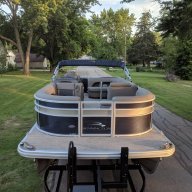 Thanks potomacbassin. Good info to look through.