Finally grabbed a pic of the pin switch.

And here's the dash switch for the under seat compartment lights. I had already used all the available switches on the dash, so had to get creative. When I bought my boat, I got it cheap because the previous owner was on a lake with a 15 HP restriction. The 15HP Merc required this low oil pressure dummy light.

Well, my current 115HP Merc does not, so I thought I would install a switch in that location. This ended up becoming a project all on it's own. I ordered a duplicate to the existing nav light switch from my dealer, and started looking around for a 2" gauge 'blank'. No luck finding a blank, so I pulled the low oil light and took it apart.

The center hole was way too big for the switch, and the switch post hole needed to be off center. I eventually came up with the idea of filling in the hole and re-drilling. Hot glue to the rescue.

Here it is drilled out.

Note the holes above the cutout for the post. I discovered that the switch 'lights up' when on by having leds under the switch cover shine through a bit of translucent plastic in the switch, so naturally I wanted to add leds too. This got me thinking about my perimeter lights project and the need to have IR receivers for the RGB controllers mounted under the helm visable from the business side of the helm, so got out the drill again...

Here's the switch installed in the dash. First off, Bennington had no remaining switch decals, which are gold with a clear gel-like coating, so what is seen above is one I had my kids make. Yeah, yeah that's it - the kids made it. Second, not real happy with the way the IR receivers mounted. They are rectangular in shape, but have a rounded base which required a larger round hole. The result is not as clean as I'd like, a square peg in a round hole kind of look, but the admiral says the perimeter lights must be done by the 4th, so these items are getting added to the "do over some day" list.
2002 2275 RL, twin 25" tubes
2005 Mercury 115 EFI 4S
Mini-galley w/ electric pump

Just adding to my list of gripes for the switch - my LED is way too bright compared to the OEM switches. 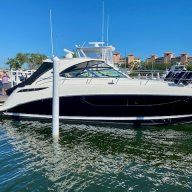 No, it is a pre-wired component type LED. Perhaps I can apply some semi-transparent plastic to act as a step down filter. I used blue on the other side, and it's not wired up yet, hopefully it will not be as bad. Always something.

You can get a lense spray tint in a rattle can, my brother used it on his taillights of his old RX-7. You know, so people couldn't see his brake and turn signals as good!! Doh! Haha
Derrick
2014 2275RCW w/Sport Tower ESP
Yamaha 250hp SHO
EZ LOADER custom trailer
Saltwater Series II prop 15 1/2 x 17
Custom Wet Sounds additions
All around good guy to know!

Here is a video!