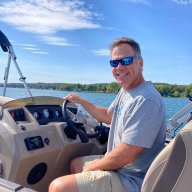 Hey gang... no build date for my Benny yet, so I am considering adding another option that I've been thinking a lot about lately... the double Bimini. The MSRP is over a grand so I passed on it during the ordering phase, but none of my research for additional aftermarket shade options has produced any viable options. The Bimini Buddy comes close, but the setup looks God-awful and the price is around $600 (plus, color won't match, no Bennington warranty...). I am a shade guy. I love the sun, but in small doses and time intervals that I can control (get skin cancer once and this is what happens!).

So, the double Bimini looks like the solution. It only adds $20 to my payment and only a hundred or two in interest over seven years. Totally doable; won't even notice it. So, unless my wife can give me a reason not to, I am upgrading. I just want to make sure the image below is what I want. There is an option for "Bimini Top Curved Double (15ft) (Custom Drawing Required)" for $1,659 but I think that is only for the curved Bimini option, correct (hence, the name)?

If my main Bimini is 10' will the double get me 20'? The description says 'twice the shade' but I think that is just marketing talk; it looks like the second Bimini provides about six or seven feet of additional shade. Not a big deal, just making sure. 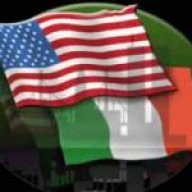 It’s not 20 feet of Bimini. Forget off hand. I’ll try to measure it tomorrow and post the measurements. At first I didn’t think the double Bimini would get used, but the family sure does appreciate it on those hot sunny days. It was worth the extra expense.
2013 Bennington 2575RL Tritoon

Someday we'll get a double bimini... summer boating in Houston seems to require it!

I didn’t want a double Bimini because of the way I thought it would look. The Mrs. wanted the double bimini for the grandkids. I’m used to the look of it now. Don’t know about the extra securing, I only have to trailer it a few miles.
2013 Bennington 2575RL Tritoon

Thank you all for the feedback! Can anybody tell me if the front Bimini can be laid down flat against the bow fence rails when closed? I like the idea of the extra shade, but really I'm not fond of having the front Bimini in the radar position when not in use. If it could be laid down flat on the fence when not deployed, I think I would be sold on it.
2021 20SLG • 25" Dual-Log • 90 hp Yamaha VMAX SHO • Talon 13.5x12p Aluminum Prop • 27 mph WOT at 6,200 rpm • Under Deck Wave Shield • Double Bimini with Ice Blue LED Lighting • Kicker Speaker Upgrade • Garmin Striker 4 Fish Graph • Stainless Steel Docking Lights • Tilt Steering • Heavy Duty Rub Rail • Custom Wheel Upgrade with Zebrawood • Privacy Enclosure • Second Rectangular Table for Bow

GWLK said:
It’s not 20 feet of Bimini. Forget off hand. I’ll try to measure it tomorrow and post the measurements. At first I didn’t think the double Bimini would get used, but the family sure does appreciate it on those hot sunny days. It was worth the extra expense.
Click to expand...

Can it lay down flat against the rail when not in use? Or does it always have to stay up, even when not in use?
2021 20SLG • 25" Dual-Log • 90 hp Yamaha VMAX SHO • Talon 13.5x12p Aluminum Prop • 27 mph WOT at 6,200 rpm • Under Deck Wave Shield • Double Bimini with Ice Blue LED Lighting • Kicker Speaker Upgrade • Garmin Striker 4 Fish Graph • Stainless Steel Docking Lights • Tilt Steering • Heavy Duty Rub Rail • Custom Wheel Upgrade with Zebrawood • Privacy Enclosure • Second Rectangular Table for Bow 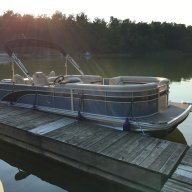 OP: If your budget is that tight, why waste money on a zebrawood wheel? It will have exactly zero effect on function and performance.

Shmily said:
OP: If your budget is that tight, why waste money on a zebrawood wheel? It will have exactly zero effect on function and performance.
Click to expand... 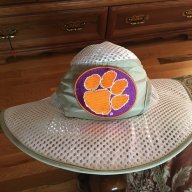 I don’t have one but I think when it’s laid down in “trailering “ position it will be laying across the bow. Very much in the way.
F

I have one. First option I put on order form! Would not be without it! Yes it folds down and rests on front deck. You will find you are glad you ordered it.
D

I thought the same thing about laying it down but I leave it in the low position when trailering and ass soon as I get to the lake I just put both tops up and never think twice about it. April and early May I have taken it completely off and left it at home. But honestly that is more trouble than it is worth. When it is in the boot trailering I do have to add some ties to it to keep the Bimini boot from flopping in the wind to the point it will break something 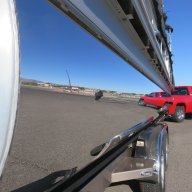 Well gang,
Our '14 25RCL came with a double Bimini due to the previous owner requesting it. And I gotta tell ya, I wouldn't have it any other way. I've never given the looks of it when both are secured with their covers, in either the *stand up* or, *stand low* position. The stand low position is for travel. There is considerably less wind resistance in that position and therefore less strain on any and all mounting points. You can see the height differences between the two secured positions in the pics. If this boat would have come with only one bimini, I'd have almost immediately ordered up its sister. The double shade it provides is a life saver in much of our boating excursions here in Lake Havasu, especially during the *warmer* months.
Scott

Does look nice and the shade is a must in Florida but not so sure about NY
Sacandaga Lake - in the Adirondacks, NY

Well,
Only you can make that determination whether or not, the weather in any given state warrants the purchase and use of the *luxury* of a double bimini. Now, as far as it "Laying down" all the way on the top rails for trailering, well, sort-a, kind-a. By that I mean, if you look at my pics above, you'll see the bimini in two different stowage positions. One is the high version, and the other is the low version. The high version utilizes the same support legs as when the bimini is fully deployed for full shade.

But, in the lower stowed position, there is an alternate set of legs that are a lot shorter and are typically what's used for trailering. The tall ones used for high stowage and full deployment, are folded up and clamped onto the main support arms. In the short stowed position, the turbulence created by the tow vehicle and the front of the trailer itself, is for the most part, deflected OVER the low stowed bimini tops. Yes, you'll get SOME wind pressure against both of them but, it is a lot lower pressure than if the Biminis were trailered in the high stowage position.

And, due to the style of design, as in having short stowage arms attached to the Biminis, if you tried to lay the Biminis all the way down, you'd be resting the weight of the bimini solely on the short arms (in their stowed position). What that means is, instead of a long, flat surface of the main support arm laying on the long flat surface of the top rail of the boat sides, you'd have all that weight resting on a short (about 10" long) arm and the rest of the weight would be unsupported.

Now, could you do that? Of course. But, I wouldn't trailer it that way for more than say, oh, maybe 15-20 miles or so. This is just a guess on my part. In the short stowage position, you'd still be supporting a large part of the weight on the two link points of the short arms. So, with all that being said, I guess it's the old cliché: "Six of one, half dozen of the other type thing". But, the fact is, yes, it will go all the way down but, will not be long surface to long surface supported.
Scott
30 Yrs SDFD Retired
2014 Benny 25RCL ESP PKG
350HP V-8 Yamaha
Sandstone Interior/Champagne Panel/Midnight Black accent
Full Seagrass Luxury Vinyl Flooring/
Lighted cup holders/under water lights/side deck lighting/bimini Blue Ice LED lights