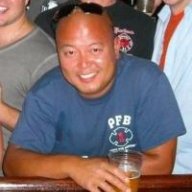 Ok, here is my plan. Now that the outside lights are done I want to run strips along the bottom edge of my furniture, to make mood lighting. In the process of getting the lights for the underdeck project, I ordered the wrong ones (3528 NOT 5050 LED's) and have 20 meters left. The difference is, the 5050 LED chips have 3 colors per chip, whereas the 3528 has one per chip, so every third LED is a different color. I figure this will help it look more party light-like, as all the colors are separated.

Opinion time: Should I just stick the strips directly near the bottom of the seats, an inch or so off? Or have any of you seen any sort of mounting channel that will make bends (~2" radius)? I'm planning on hooking up this set to a music controller, so the lights flash, change and fade to the beat...

Then will come an 8" disco ball, (2) led spotlights, and more multi colored LED's on the bimini frame (so it illuminates when closed)

I see a second house battery in my future too.

Well based on your pics from the fourth of July, you are the reigning party king with a ratio like that. I agree with the "party-like look" of the 3 separate LED chips, it makes them look like they're dancing! Wasn't it Gee that had the killer tow boat with the lights? Maybe he has a magic trick he used. I was thinking under the lip of the seat top so it is invisible during the day, but I don't have a boat at the moment to go out and look and see if that works at all. The only other thing I can think of at the moment is that little L bracket type tile stop. It comes in different colors, probably aluminum, you could attach it along the base so it makes a little 'ledge' for the strip to be mounted underneath, similar to what was being done for the perimeter led strip. Dunno, tough to think without looking at it.
Derrick
2014 2275RCW w/Sport Tower ESP
Yamaha 250hp SHO
EZ LOADER custom trailer
Saltwater Series II prop 15 1/2 x 17
Custom Wet Sounds additions
All around good guy to know!

I like the under the lip location. It gets it off the floor and gives it the indirect look. And I should be able to stick it directly to the seat with no mounting channel.

I had looked at the under the lip location, only thing is that it compresses (into the speakers on some sections) when the seat is lifted to gain access to the storage compartment. This makes for two issues, one, will the strip stay secured; and two, each under lip location will have to be a separate strip to prevent 'pull away' from the neighboring sections.
Last edited by a moderator: Jul 10, 2013
2002 2275 RL, twin 25" tubes
2005 Mercury 115 EFI 4S
Mini-galley w/ electric pump

Jim, aside from my moveable bow seat, the seating surfaces are continuous. I'm going to have to take a look though to see if the hinge action is impeded by its presence. I'm actually thinking that running them along the floor line is the best option, other than the fact that you'll see the strip around the perimeter. It will also allow for a seamless transition to the center walkway lounger areas, where there are no seat overhangs. I think after a while it will blend in to me, and be not really noticeable to my passengers.
Last edited by a moderator: Jul 10, 2013

Jim after some thought I think I know what you meant. I'd probably put the lights on the vertical face of the seats facing outwards, not downwards.

Thought about this a bit while on the boat this past weekend. On my boat the seating is on a carpeted pedestal. The seating overlaps the pedestal by 3/4 - 1". That might be the place to install them pointed downwards. The lights are bright enough so you should get the desired effect without killing your night vision.
2002 2275 RL, twin 25" tubes
2005 Mercury 115 EFI 4S
Mini-galley w/ electric pump