Anyone in the area participating? http://timsrivershore.com/potomac-river-poker-run/

I've read about these but this will be our first time participating.  The weather should be great to be out on the water and we get to explore some areas on our list that we haven't been to yet.  Add in some family coming up to join in the fun and this has all the makings of a great weekend! 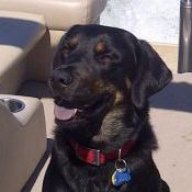 Daniel........sounds like a blast! We'll be at Lake Anna on Saturday. Couldn't go on our usual day today......Been to every where on that list except for Gilligans. Captain Billy's crabhouse probably being our fav spot. My wife's boss has a summer place at Fairview Beach right down from Tim's and we were just there for a cookout..................Hope you guys win the pot!!! Any idea how many entrants there are?!?
Daril Godinez

We had a good time but it wasn't as fun as I expected for a variety of reasons.

1.  I planned to get gas en route to Tim's Rivershore for the start but the state park pumps weren't open at 8 like they were supposed to be.  We had to go back and fill up after the captain's briefing.

3.  Didn't realize how far apart the destinations were.  Average about 15 miles between points.

4.  We were the only pontoon.  Way too many go fast boats (it's not supposed to be a race).  Instead of the leisurely pace that we expected, I had to go full throttle for long stretches to get to the points in a reasonable time (compared to the others).  We didn't get to socialize much with everyone else since we barely got to the destination before we had to head for the next one.

5.  Last minute destination change - instead of Captain Billy's crabhouse we went to some dive bar called Scuttle Butts on Cobb Island.  So instead of eating lunch at Billy's and then spending an hour or two at Gilligan's (which is right next door) we had to haul 17 miles to Cobb Island for a so so meal and then back another 17 miles to Gilligan's.

Don't get me wrong, we still had a good time even if it wasn't what I'd expected.  We got to go several places that I'd been wanting to see (including the first trip south of the 301 bridge).  Aside from lunch the the food was really good.  The best part (other than spending an entire day on the water with family) was that we took second place!  Covered our entry fees plus a little (but it didn't cover the two tanks of gas I burned through).

Now that I know what to expect I'd considering doing it again next year (as long as long as it's Captain Billy's and not Scuttle Butts for lunch).

Sometime next month I think I'll make a leisurely trip to Captain Billy's and Gilligan's for the day.
DJPlourd

Glad you guys took 2nd! Never knew the name of the place next to Captain Billy's. Now I do...........What did you think of Tim's at Fairview Beach?!?
Daril Godinez

I think Tim's II (Fairview) is a lot nicer than Tim's Rivershore.  It's definitely a lot bigger!  I was surprised that Tim's II didn't really have any dock space.  I don't mind anchoring but I prefer to dock because we tend to make multiple trips back and forth to the boat.

I also want to check out Rick's on the River which is close to Tim's II.  One of the guys we were talking to said the food there was much better (I thought the food at Tim's was just fine).
DJPlourd

We've been to Tim's at Lake Anna multiple times (even before we got the Bennington). I think the food at Tim's Fairview was the best but we've only eaten there the one time.
DJPlourd