doug Schwartz said:
how big is the fuel tank on a RBR 25 with the sports package a2013.
Click to expand...

Hi Doug! Just go to the main Bennington Page, do the build a boat and click on view instead of build, then click on the specs option. That will show what is standard, unless you opt for the center mounted fuel tank, then it should be 50-55 gallons
Derrick
2014 2275RCW w/Sport Tower ESP
Yamaha 250hp SHO
EZ LOADER custom trailer
Saltwater Series II prop 15 1/2 x 17
Custom Wet Sounds additions
All around good guy to know!

Anyone know how to fix a nav switch. Works when I press it down and the bemini lite goes on. But press it upwards and the nav lites do not work.
D

Sounds like a loose connection on the switch to me. Since the switch obviously has power. Check the back of the switch under the helm.
2013  2375GCW

IMHO the "owner's manual" given to me and posted on line is a joke.  It is generic for all models and has virtually no specific information in it at all.  As one of many examples, I have a boat with a sink.  I found the water tank for it beneath a nearby seat and filled it.  When we went on our first trip, I had occasion to wash my hands and flipped on the water pump switch found next to the sink.  Sink worked fine.  Had no trouble figuring out how to remove the plug and drain it.  A little while later I noticed a plastic cover on top of a box next to the back rail, took it off and found a hose coiled up inside a container that was full of water.  When we had occasion to use the sink again a short while later, my son observed that there was water coming out of that same cover.  Lo! and behold!. Turning on the pump also activated the hose, which had a fitting on the end I had never seen before.  A short period of experimentation revealed how to open and close what is apparently some sort of a nozzle.  The box containing the hose container has a snap on cover on it that has some stuff in it that looks complicated and I haven't had time to figure out yet.

None of this is mentioned any where in any of the literature supplied with the boat.  How come?  A purchase this expensive should have a manual available somewhere that contains detailed information on exactly what everything on the boat is and how it works.  I have two accessory switches at the helm and haven't had time to figure out what each controls.

Your dealer should have showed you all this. With a boat, you won't get a manual like a car.
Carl&Suzi
2007 2275rl tritoon w/strakes
150 Honda 15x15 Enertia
power assisted steering
Denver, NC Lake Norman
Pleiku Vietnam 1971 Door Gunner
Agent Orange survivor (so far)
Livin' the dream.

Ditto what Carl said. This is a dealer issue.

Agreed a dealer issue .There is no way Bennington  could publish a manual for each boat .There are too many possible combinations over the 4 models lines .

Trooper, if you are referring to the transducer =of the fish finder you should be able to just reach down and tilt it down a little more.  If that doesn't help in some cases a few have reported that it took actually removing it and then putting it back on a little higher or lower.  Cwag and kaydano seem to know quite a bit about this perhaps one of them will chime in
Sacandaga Lake - in the Adirondacks, NY 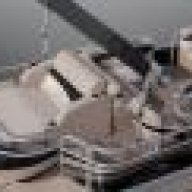 I only know what I know due to having problems with it. My experience is it needs to be level with the earth, so adjust for the attitude of your boat, and it also need too run through clean water (no air from turbulence of the boat). There are tilt and height adjustments on the transducer. Try the tilt first, assuming it was installed correctly for height, which is a good assumption. Only lower the entire transducer as a last resort. I have generally found that when it stops working, it is due to hitting a dead fish or small stick just below the surface.
Last edited by a moderator: Jun 12, 2014
24-SSL (2012) Express w/6 strakes, awesome cable steering because I'm cheap, big gouge in pontoon where marina staff sideswiped their dumpster, redneck emergency toilet via bucket with a toilet seat glued to it (hey, its just a toilet), polished toons and a broken ladder strap. Hoping to log my 200th trip out this year (2018).

Damn those dead fish, always in the way
Sacandaga Lake - in the Adirondacks, NY

Trooper52 said:
I am looking for the manual to adjust the alarm depth and stuff in the menu of the gage
Click to expand...

it is a hummingbird gage

See if this helps ??