Of course, all of us already know that pontoon boating is awesome, and is gaining popularity.

This little news article talks about the rise in popularity in Michigan for pontoon boating - particularly due to Gen X and Millenial’s boating styles. It also had the following statistics that remind us of the importance of safety and wearing PFDs.:

• 70 percent of people whose boats have capsized or people who fall overboard drown,

• 85 percent of people whose boats capsized or those who fall overboard and drown have PFDs in their boat but are not wearing them.

• 63 percent of all people who drown never intended to be in the water.

• Drowning is the second leading cause of injury-related death among children under the age of 15.

• It takes only 20-60 seconds for a struggling victim to drown. 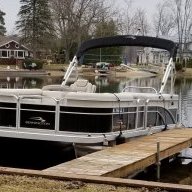