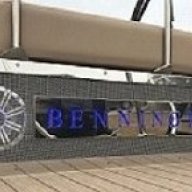 Just wondering if any of you folks on here are running a 150hp with the SPS package and Sea Legs (or other brands)? The boat that I just put a deposit on is a 2018 23 SSBXP with SPS and a 150hp Merc 4 stroke. From what I've learned on here is with that set up I could expect to see 36-40mph. In my particular case I can't go with a traditional lift so I need the sea legs. My goal is to hit 30mph with the legs. Is that a realistic goal?
2018 23' SSBXP - SPS - Blackout Package - Sea Legs - Lillipad diving board
150HP Mercury Four Stroke (15.6"x13P Stainless Enertia prop)

Just a bit of a guess on this based on other peoples posts in the past, but I would think that you'd still hit 30 at WOT with the SPS 150 Merc on a 23' SB and Sea Legs. Like any boat, you may need to tinker with engine mounting height and prop to maximize performance mixed with the drag/weight of the Sea Legs.

I had debated on the Hewitt Legs or Sea Legs last winter on our new boat before just sticking with a traditional lift set up. However, I spent a fair amount of time talking to those that had them. I think you will be good to go, but maybe someone has this specific set up and can give you a more precise answer. Either way, congratulations on the new boat order.
Jeff Smith
Cottage on Houghton Lake, Michigan
2017 24' SSBXP with SPS package
200hp Mercury Verado Pro

My 2 cents is to stay away from Sea Legs. Last summer, my dealer had a new R-series 25 footer in the shop all summer to repair the damage caused by the Sea Legs collapsing and basically ruining the center tube and aluminum decking structure. Huge insurance job.

Desirable top speed and Sea Legs should never be used in the same sentence. The engineering for the 3 tube boats with Sea Legs has yet to be perfected. Buyer beware.
Randy from Michigan

I can't remember the member, but he had his removed (FarNorth maybe? I think it was a Q) because of the drag of them and the deflection of water underneath wasn't good because a large section of his underskinning had to be removed for them.
Derrick
2014 2275RCW w/Sport Tower ESP
Yamaha 250hp SHO
EZ LOADER custom trailer
Saltwater Series II prop 15 1/2 x 17
Custom Wet Sounds additions
All around good guy to know!

Thanks a lot for the input but due to park regulations at the lake where our cottage is at I can't put a regular lift in. I've had sea legs on my last two boats but they were 2 tube, so a bit lighter, and absolutely love them. I wonder if that guy was lifting it with the boat loaded right up with people? The triple toon version is rated at 7500lbs and the combined weight of my boat and motor is about 4000lbs (say 4500lbs with fuel and gear) so that's a pretty good safety margin. I've heard a few negative stories about sea legs too but I've had them for about 10 years now and I've never encountered a single problem with them. I've heard that some people don't lift the boat right out of the water at the end of the day and that's not good because then the waves work against the sides of the pontoons and can move the boat around. I always lift mine completely out of the water and have never had any trouble. I know it'll impact performance a bit with them but there a lot of positives to offset that as well. It's really nice to not have to drag a lift in and out every year, nice to have your lift wherever you go (other lakes, beaching, fuelling,ect.), being able to sharkhide the bottom of toons with it lifted out of the water, ect. I'm not being a smart a$$ but if performance was my main goal I wouldn't be in a pontoon boat.
Last edited: Sep 12, 2017
2018 23' SSBXP - SPS - Blackout Package - Sea Legs - Lillipad diving board
150HP Mercury Four Stroke (15.6"x13P Stainless Enertia prop)

No worries! You asked about the sea legs, so we were all just commenting on previous discussions. You've had them before, so you would probably know more than most of us about them. The problem wasn't in their functionality, it was with them underway. I'll see if I can find the old post. Not that it matters, since that's your only option. Just trying to be informative.
Derrick
2014 2275RCW w/Sport Tower ESP
Yamaha 250hp SHO
EZ LOADER custom trailer
Saltwater Series II prop 15 1/2 x 17
Custom Wet Sounds additions
All around good guy to know!

After reading that, I'm thinking you should be OK, since you won't have near the weight that he did. He did say he really liked them. In another post he stated that he removed them in the end. So let's see some pics when you get her all set up!!
Derrick
2014 2275RCW w/Sport Tower ESP
Yamaha 250hp SHO
EZ LOADER custom trailer
Saltwater Series II prop 15 1/2 x 17
Custom Wet Sounds additions
All around good guy to know!

Thanks for the link! Yeah, I wish they didn't affect performance but unfortunately, like most things, there's trade offs. I love the convenience of them but that comes with a price.
I will get pics up as soon as I get her but it won't be in until mid November or so.
2018 23' SSBXP - SPS - Blackout Package - Sea Legs - Lillipad diving board
150HP Mercury Four Stroke (15.6"x13P Stainless Enertia prop)
You must log in or register to reply here.
Share:
Facebook Twitter Reddit Pinterest Tumblr WhatsApp Email Link
Top